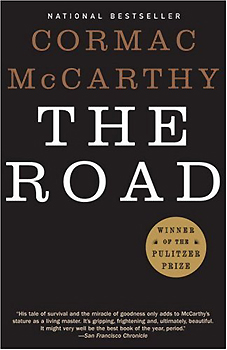 My first warning about Cormac McCarthy’s The Road should have been the fact that Oprah raved about it. Every time I pick up a book that has one of her stupid book club stickers on it, I inevitably hate it. I’m not talking about the already established canonical favorites of literature nerds. I’m talking about new releases she latches onto with her trademark joie de Oprah.

But this book won not just her questionable praise. It also won a Pulitzer Prize for Fiction. I’ve loved several novels that can also claim such a win, including Harper Lee’s To Kill a Mockingbird, which I consider one of the most perfect novels ever written. So I thought this fact might help to balance out the taint of Oprah praise.

Perhaps it is because I love a genre that has done post-apocalyptic tales in multiple (and, dare I say it, better) ways. So the idea was not new to me. The concepts were not new. The behaviors were not new. The story was not new. The style was not new. I recognize the beauty of McCarthy’s sparse, restrained prose. But it, too, is not something new or unique to him. Book nerds will recognize in his style myriad other writers from disparate genres: Kerouac. Kesey. Carver. Sarmago.

Actually, José Sarmago is a perfect example of similar styles and themes executed with greater effect. Blindness, though not a post-apocalyptic tale, deals with the devolution of humanity when impacted by an unpredictable and unpreventable event that strips away the veneer of “civilized.” Sarmago’s prose is equally restrained, and his style is similarly unique (yes, that’s an oxymoron). I found Blindness to be far more provocative and unsettling. This novel unnerved me in many ways and remained in my thoughts for weeks after I finished it. The Road was something that I found myself continuing down simply because I wanted to finish it. Not because I needed to. I already knew how it was going to end.

Blindness was turned into a movie recently. I’ve yet to see it because I feel that the book is so wonderful that to watch this in movie form would somehow lessen the impact of Sarmago’s surgically wielded words. The Road is also being turned into a movie. I’ll probably skip seeing that as well, at least until it comes out on DVD.

Final score: 2.5/5. This is a middle-of-the-road novel (sorry for the somewhat intended pun), which is not necessarily a bad thing. I think all the hype and praise I had heard and read for this novel over-inflated my expectations. If you go into it with expectations as sparse and restrained as McCarthy’s prose, I think you will be far better prepared for what you find.